Jazzy sat alone on the verandah, hugging herself and rocking back and forth. Practically everyone was asleep on this hot summer day, except Jazzy and her mother, Lakshmi. Why wasn't mummy asleep? thought Jazzy and then remembered she was busy getting the guest room ready for the relatives arriving over the weekend. She returned gloomily to her current problem, which was beginning to scare her the more she thought about it. How could I have been so stupid? What will I do now? I cannot fail, not now...I've never failed!

Jazzy was lost in her troubles and nearly missed her mother calling her name. She jumped to her feet and walked up the stairs quickly. The maid had just finished sweeping the room when she entered, making her cough a little.

"Where have you been all this time Jazzy? I've been calling you for 5 minutes now!" barked her mom, worried as usual about the impending guests.

Sometimes Jazzy felt like the front door should be replaced by one of those revolving doors for offices, relatives and guests came and went in a procession of sorts. 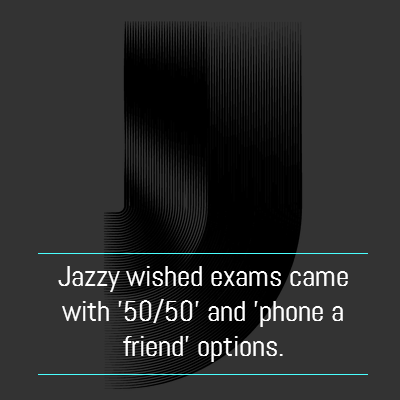 "I was just thinking about my final exams...." wailed Jazzy and to her mother's horror, fell on the bed and started crying. Lakshmi was quite stunned. Jazzy had always been a straight A student, from her first kindergarten exam onward. True, she tended to stress a bit too much over her studies but this was completely unexpected. She gave her daughter a few minutes to calm down before asking her what exactly the matter was.

"The first year exams are starting in just 3 weeks and I don't know a thing!" Sobbing intermittently, Jazzy poured out her woes. "I hate the boring classes and don't understand anything of economics or law. But those papers are not a problem, I can pass them somehow. What I am really terrified of is the Accounting paper. I'm surely going to fail Amma!"

Lakshmi asked sternly "And why didn't you come to me or your father until now? We could have arranged some tuition or additional help if you had only told us you were having problems in class!"

"I was afraid of getting scolded, what will father say?" Inwardly Jazzy thought 'He doesn't praise me even if I top the class, God knows how he will react if I say I actually failed!'

Lakshmi sighed. Murthy, her husband, was a good man and did everything he could for his family but he was certainly not affectionate towards the children. They were all afraid of him to some degree, even though he never yelled or got angry with them. But that could not be helped right now.

"Well I'm not going to scold you, you are upset enough as it is. But you need to talk to your father about this, the sooner the better. I'll tell him about it tonight but tomorrow you have to ask him for help yourself."

"Do I have to? Can't you just arrange something and tell me what to do?" asked Jazzy hopefully. She really was scared of her father.

Lakshmi shook her head. "No Jazzy, you know he will expect to talk to you about this. After all, it is your problem. You have to take care of it."