In 21st-century India, change is so rapid that we barely have time to get used to something before some new trend is on the horizon. And I'm not just talking about technology here. Whether it is human behavior, relationships, societal or cultural norms, Indian society – along with the rest of the world – today is hardly recognizable to my parents or their parents. 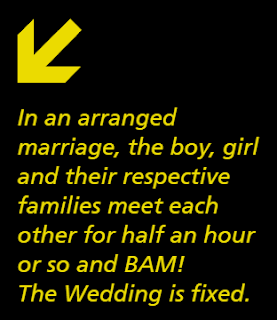 It's not a surprise that the institution of marriage and the process of finding a life partner is also undergoing a metamorphosis. Perhaps this is one of the areas where the gap between generations is the most obvious. Almost every day, there is a TV show or media report or blog post talking about arranged vs. love marriages. So I figured I would present my take on it as well!
Whenever anyone talks about arranged versus love marriages - I don't know why they are always portrayed as opposing players, as if there can be only one winner! - we instinctively have an idea of what the two terms mean. Most of it is from what we see in the movies or read about in books. In an arranged marriage, the boy, girl and their respective families meet each other for half an hour or so and BAM! The marriage is fixed. In a love marriage, only the boy meets the girl, they fall in love and then they have to oppose their parents (caste, money, religious issues etc.) to get married.
But I would argue that there is more to it than that. Let me give you two examples – one of an arranged marriage and one of love marriage that happened in my own family.

Can you see the similarities in the two situations? In both cases it was the decision of the boy and girl to get married, the families and parents got involved later. All sets of parents were sensible and gave their blessings to the matches once they realized that the boy and girl were compatible and in love with each other. There was no drama, fighting, arguments or other distractions that is often portrayed in movies. And the only difference between the two situations was the actual process by which the girl meets the boy. In the former, they meet online and in the latter they meet through the traditional arranged marriage process. 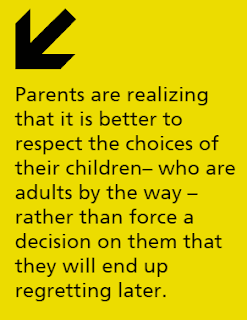 More and more, I think this will become the norm in Indian society. Young adults falling in love are not doing so without any foresight or thought for the future. In fact this generation is looking for compatibility, honesty and trust before committing to a single person for the rest of their lives. Parents are realizing that it is better to respect the choices of their children– who are adults by the way – rather than force a decision on them that they will end up regretting later.
For many of us, even the traditional arranged marriage process is not the same as it used to be. No longer is it taken for granted that the wishes of the boy and girl don’t matter. It is expected that they will talk to each other and come to a mutual decision, rather than how it was for our parents or grandparents. My parents were not allowed to talk to each other in private before the decision was made for them by their parents. I don’t think my grandmother even saw my grandfather before the wedding! But most parents today do not expect their children to get married to someone sight unseen or without even talking to each other.
As far as I can tell, in many middle-class families, the only difference between a traditional arranged marriage and the modern love marriage is who introduces the girl to the boy. In an arranged marriage, it is usually the families who arrange a meeting. In a love marriage, the couple may have met in college, in office or through mutual friends. But the end result is that the decision to get married and who to marry is being left to the actual couple in question, rather than being decided by parents, families or other elders. After all, who says love marriages and arranged marriages cannot prosper side-by-side?
So what do you guys think? Share your own personal experiences in the comments below!
P.S: If you haven’t already guessed, the two girls in the article are none other than me and my sister :D