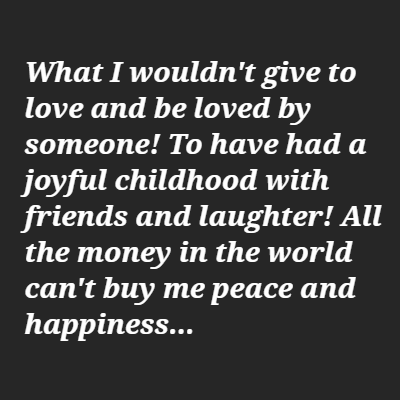 “Tia darling! So nice of you to come to my party, it’s been a long time since we met at that charity event!” exclaimed Mona, handing her a glass of wine as soon as she entered.

“You look fabulous, my dear!” replied Tia, “So I take it you like the new DSK Spring collection?”, indicating Mona’s brand new designer gown.

“Really? Thank you! I remember what you said about me not wearing pink, so I bought this green dress. Anyway,” she said, dragging her farther into the room, “You know most of the people here I expect. I’ll talk to you later, I have to check up on the caterer now.”

Someone hailed Tia and she was soon busy with her regular cronies. She wouldn’t have come here if not for Mona, who was one of the few people she felt comfortable with. She disliked crowds but hated being alone even more so. Ten years of homeschooling could do that to a person. She could still recall the day she was kidnapped from school as a young child of 8. The police eventually caught the criminals and she was sent home but her father decided that she couldn’t be risked in school any longer. She had had the best teachers but no friends.

Mrs. K broke into her thoughts, “Do you know Tia, my sweety is now engaged to the son of our family friend? The wedding will be in December I think, most likely in Australia. Young people nowadays want a destination wedding and I just couldn’t say no!”

Tia murmured the appropriate congratulations. Involuntarily, she thought back to her own engagement practically 35 years ago. She’d just come back from Harvard and not 6 months later, Karan proposed. She’d been ecstatic, they’d grown up as neighbours and liked each other well enough. Her dreams of a happy future were dashed when - just 2 months after the wedding - she caught him in their vacation cottage with his current girlfriend.

She could still remember the exact words he’d said. “Don’t pretend you’re surprised, you don’t love me either. I don’t mind who you sleep with, as long as the press don’t find out. Of course there will have to be children but other than that, I’m not interested in you.”

She hadn’t expected a romantic marriage but they weren’t even friends. They were just 2 strangers living in the same house who had kids. Well technically they had kids. Kids who had been in boarding schools and international colleges for most of their lives. Now she had five grown grandchildren and not one of them had she seen in the last 3 years.

Her 30s and 40s were spent in a haze of drugs, alcohol and therapy. Only after her fiftieth birthday had she started taking care of herself. Wryly, she remembered a compliment from a journalist a few weeks ago. “You look better now than you did at 35!” he had trilled. Of course, she did. Money and time could get you a lot of things.

Tia went out on the balcony, the noise was making her head hurt. From here, one could see all the way to the lake at the end of the property. Abruptly she heard laughter to her right and went across to the other end. Looking down, she saw a maid and her family eating their dinner. It was the kids she had heard. This would be the most they would eat in weeks, yet they were laughing and playing without a care in the world.

What I wouldn't give to love and be loved by someone! To have had a joyful childhood with friends and laughter! All the money in the world can't buy me peace and happiness...