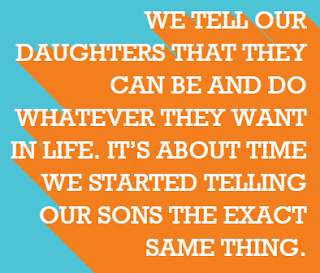 One of the hot button topics right now in Indian media is the safety of women – or rather how our country doesn't really care about half its population. From rape, sexual assault, harassment (in streets, public transport, nearly every public place) to violence perpetrated on women, Indians are finally getting around to discussing taboo topics.

One refrain that caught my eye throughout these debates – both online and off – is the fact that the reaction of the majority of Indians is the same: girls should stay at home, not go out after dark, dress appropriately and so on if they want to stay safe. No one seems to bat an eyelid when laying down these precautions for women. Except that the reality is women would be far safer if all the men simply DID NOT RAPE or HARASS any person that looks remotely female. No one has to stay at home and become a hermit!
That got me thinking further. For at least a generation now – especially in urban India and educated middle-class families – we have raised our girls to be confident and fight for their rights. But we seem to have ignored an entire generation of boys who were not told anything about how their sisters were changing. While we gave our daughters new ideals and role models, no one bothered to tell their brothers that they ought to change too!
Let me give a few examples:
Essential Life Skills – Driving and Cooking
In many cities and towns, girls drive two wheelers and cars. It is considered an essential life skill if you want to study and work. You can often hear dads proudly proclaiming that their daughters can drive very well indeed and they don't need a boyfriend/husband to take them anywhere.
However boys were never taught that cooking is an essential life skill. You don't see parents proudly saying that their son can cook and doesn't need a wife/girlfriend to feed him (and keep him alive!). As a result, very few men cook after they get married (never mind that they used to when they were bachelors) and the expectation is that the wife will take care of the kitchen even when both partners are working.
Identity Issues and Self-Esteem
We tell our daughters that is it okay for them to have a career and do the jobs that were reserved solely for men. Working women are looked upon as confident and independent people.
But we don't tell our sons that it is okay for them to be paid less than their wife or God forbid, stay at home to take care of the kids while their spouses continue to work. So what is the result we have today? Many women actually have options – they can continue to work or stay at home when they get married or have children. For the men? No such luck... They are openly derided or laughed at if they don't have a job. 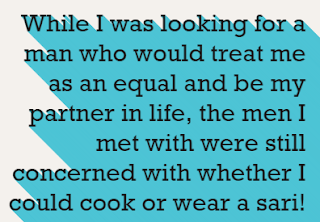 Expectations and Realities of Marriage
The same difference in expectations pops up when looking for a life partner as well. Many young women today expect their husbands to treat them as equal partners – whether in terms of finances, household chores, who takes care of the kids or family responsibilities.
On the other hand, I've seen countless examples of men who wanted to marry a working woman (in theory) but were completely unprepared for the practical reality of a marriage where both partners work. It means doing the dishes or supervising the maid when your wife has a report to complete, it means taking half the day off to take care of your sick son because your wife has an important presentation. It may even mean giving up a promotion or moving to a new city for your spouse's career.
Because we don't tell our sons all this, they continue to expect that their wife will automatically give up the job/promotion/transfer in favor of the family whereas they will never have to take a step back from their own careers.
This difference becomes even more stark when you consider families with only daughters or only sons. My own family was one such. My sister and I were raised by my parents to be the best people we could be and never held back because we were girls. We drove our own vehicles, carried our own luggage, managed our finances and filed taxes and did all the countless little things that you have to do when you live on your own.
It wasn't actually until we started looking at potential life partners that I realized boys are still raised the way they were for the last two generations. While I was looking for a man who would treat me as an equal and be my partner in life, the men I met with were still concerned with whether I could cook or wear a sari!
So what are we left with at the end of the day? Indian men and women are still scrambling to reconcile their expectations with reality. Both men and women bear the burden of this lopsided upbringing. Women are upset that dinner – and the house, kids, in-laws, maid – is still their responsibility while the men don’t know what they did wrong. After all, they ‘allow’ their wives to work, what more do they want?! Women know that they can be assertive at work and pursue ‘masculine’ things like investing in the stock market but men do not know that they can cry and show emotions or pursue ‘feminine’ hobbies like cooking.  We coach our daughters on how to stay safe outside at night but we don’t tell our sons to step up if they see a man harassing a woman in public. Women are applauded for stepping out of the home but men are shamed for daring to stay inside.


My intention is not to minimize the sufferings women still go through in modern India – we haven't managed to stop the practice of dowry, selective abortion of female fetuses and the countless other ills plaguing our country. But there is no way we can solve the problem just by focusing on one half of the equation. We tell our daughters that they can be and do whatever they want in life. It’s about time we started telling our sons the exact same thing.