Day of the results

The results had just been posted on the notice board and a horde of excited students rushed to check their scores. Some whooped in joy when marks exceeded their expectations while others moped. Some students were furiously debating whether to submit their papers for revaluation. Jazzy stood nearby, watching and trying to work up the courage to take a peek at her scores. She congratulated her friends on their results and assured them that she would catch up with them later at the college canteen. When they asked about her marks, she only replied that she hadn't seen them yet.

One part of Jazzy argued with the other, Don't be such a coward! You've done so much hard work, you have surely passed. Even if you haven't, it is better to know that to bear this torture of not knowing. Do it like ripping off a band-aid, fast and painless.

Still, she waited until the crowds thinned a bit. Now only a handful of girls were left and no one was paying her any attention. First, she went up to the section where the failed students' roll numbers were posted. She took a minute to go through the short list, astounded that her number wasn't there.

I passed! But wait. Maybe I made a mistake, maybe I'm seeing the wrong roll number?

She took a deep breath and ran her finger, slower this time, down the column of numbers. She couldn't believe her eyes but she had not failed any of her papers, not even the once-feared Accounts.

So how much did I get?

She finally found her roll number and wrote down the marks in each subject. Her legs felt like jelly, though she felt like jumping up and down with joy. She sat down to absorb what her eyes insisted had to be true. Not only had she NOT failed, she had actually scored quite respectable marks in each paper. But her most cherished result was the Accounts paper which had a 58 next to it. Not quite first class but not failure either. 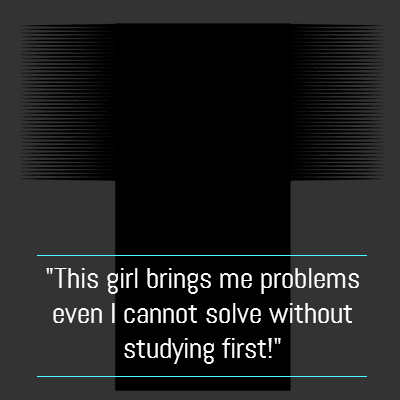 "And the college gold medal for the highest scoring student goes to Jazzy!"

The auditorium exploded in thunderous applause as Jazzy walked up and got her medal from the Chancellor.

Hours later, Jazzy was still dazed. She had gone from assured failure to gold medalist in just 2 years. Even her friends had been shocked to see just how much interest she took in her studies, through the second and final years of college. She fondly remembered the coaching classes on early weekday mornings and the hours she had spent poring over different text books - some borrowed from students in other colleges.

But the highlight of the last two years had been when MK pointed her out to his first year students and said, "This girl brings me problems even I cannot solve without studying first!"

The above story is based on real incidents and characters (with only their names changed). Jazzy is none other than my mother. Except for minor details, everything I have written about actually happened 34 years ago.

Read from the beginning: Part I - The Confession

Read the complete story in one place: The Girl Who Would Not Fail