June 04, 2014
Before I get down to the rules, here is a working definition of heroine:


Heroine: Female movie lead who falls in love with the hero. Always.

She is a good person, with no shades of gray. Always.

1. A heroine should conform to a certain 'type' 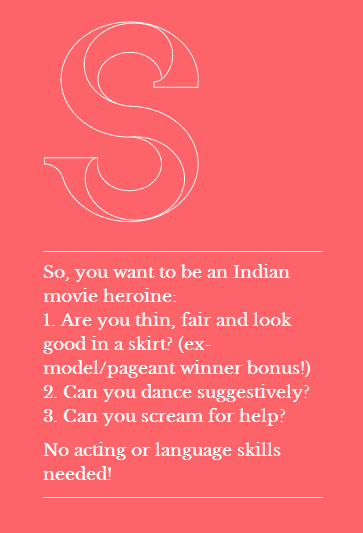 2. A heroine should be a virgin
Not being one automatically disqualifies her. If she has to eventually end up with the hero after all, the director will go to any lengths to show that she is still a virgin, somehow.

One of my favorite Tamil movies 'Rhythm' shows the heroine with a young son who (it later turns out) is adopted and her first husband dies in an accident before they could consummate the marriage. Seriously. There is no reasonable plot point (in this movie) which depends on the boy being adopted other than this rule.

3. A heroine should say 'no' when the hero says 'I love you'
Whether she is an SS or DD, no heroine can say yes to the hero's first attempt. She has to be pursued and persuaded to say yes. Indian movies try to show that this 'proves' women have power but in reality, heroines have no agency. Their job is to simply say no to every guy until the hero comes along. This is changing, albeit slowly (see Telugu movie Journey for an example)

4. A heroine will somehow end up in trouble with a bunch of thugs
This is so that the hero can save her. Usually at this point, the heroine relents and accepts the hero's love because he saved her. The general exception to this rule are action movies starring criminals/police where the heroine receives even less screen time than usual. Here, action quota does not need heroine's involvement to be fulfilled.

5. A  heroine is an expert at screaming for help
Usual phrase being 'bachao' in Hindi, 'kaapadandi' in Telugu and 'kaapathunga' in Tamil. Heroines never scream in English or speak in English - this is a sign of arrogance. A DD will typically speak in English until they are taught a lesson by the hero, after which they will start to speak in whatever Indian language the movie is made in.

6. A heroine is always ready to dance in revealing clothes
The above rule holds for both DD and SS types. Generally the song and dance routine takes place in an foreign country even if the entire movie happens to be set in a small Indian village. Sometimes, the songs involve dancing in extremely cold temperatures with snow. The hero is permitted to wear jackets and boots but heroine will always be attired in skirts or saris (in heels) with no protection.

7. A heroine will always forgive the hero
Not only will the heroine forgive the hero for being a jackass, humiliating and mocking her or screaming at her like a 5 year old being scolded by parents, that particular incident may very well be the straw that makes her fall in love with him! Yet, the exact same actions will be met with hostility when done by the 'villain' or 'bad dude'. How does she know who the hero and bad dude are? She just KNOWS.

8. A heroine's job is complete once she falls for the hero
That's pretty much all her job involves in a typical masala entertainer. The romance angle involving the heroine and hero is ticked, over and done with. Nothing else is necessary to be said. The only exception to this is the sub-genre of 'modern love stories' where some movies might actually show how the relationship between the two leads evolves with time (such as in Alaipayuthey or Anand). These are not the same as the typical love stories where family hostility or class/caste divisions (or any other obstacle to a happy ending) generally take the spotlight.

There you have it folks! Stay tuned for the post on "8 Simple Rules For Indian Movie Heroes" ;)