He believes that, when running, "to" is never important, what matters is "from". When it was pointed out that running just lands him in more trouble his response was "Yes, but you can run away from that, too."
- Rincewind, nominal wizard on Discworld. 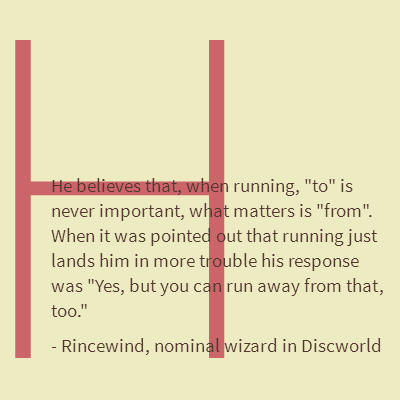 As a philosophy it probably wouldn't work here on Earth but serves Rincewind well on the Discworld. But we've all been there haven't we? You hope that your problems will simply disappear sometime, as if by magic. Even if you don't have any trouble - at present anyway, everyone knows something is just lurking around the corner; a fact common to both Earth and Discworld - you may want to just be someone/somewhere else rather than you.

Books were my escape. In my case, it wasn't that I was running away from anything as much as running towards something. Sometimes I wished I could climb inside a book and live that life. Hours after finishing a book, I'd still be able to hear their voices in my head. I don't know if fellow bookworms also feel it or I'm alone in my craziness.

Some say that books are better for children than movies because reading allows you, no - it demands -  that you use your imagination. Rarely are visuals provided and even if they are, you have to fill in the blanks yourself. I don't know how much of it is true though because how do you know which came first? Did reading give wings to my imagination or was I drawn to books because I already had an active mind?

I love when film adaptations of amazing books are announced but generally I don't watch them. No film can quite capture the breathtaking visuals my own brain conjures up when I read...In fact seeing the sets on the screen is jarring, pulling me out of the story because everything is unfamiliar, so unlike the rich tapestry I'm used to. I read old favorites many times and know some of their stories as intimately as I know my own. Movies are a great way for many people to experience the written word but they are not for me.