I woke up with a start. Finally managing to see the time after several attempts, I practically leap out of bed. Or tried to at any rate. I'm not one of those people who jump out of bed in the morning and sing along with the birds. In that respect I’m more Rachel than Joey. It usually takes me some time to adjust. So the fact that I tried, even just once, must be enough to tell you that it was eight and I was unpardonably late. Making my bed and brushing my teeth took the usual 15 minutes. 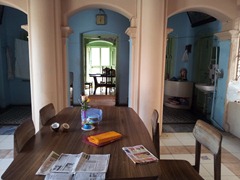 Most people begin the day by wishing others good morning. My mother, on the other hand, makes a resolution to tell me to do something exactly 30 seconds before I drag myself to do it. It's a gift; one which most mothers seem to have, especially mothers with lazy children like me.

As per schedule then, she popped up in the mirror behind me and said,
"Drink your lemon juice and wash the glass when you're done."
"Already did."
Ha! score one for me.

The glow faded when the realization dawned on me that Fate was likely to be waiting around the corner to ambush me someplace else. Fate is always like that, its motto being 'live and let die.' Or something along those lines anyway. Brushing done, the next order of business was taking stock of who has finished the morning shower and who hasn't. The three women of the family (namely my mother, her mother and my aunt) having, as usual, finished by 7 or there about, leave the floor free for my seven year old cousin to take bath. As the only one still going to school, he finishes up by 8:00 and is not to disturbed till he's done. 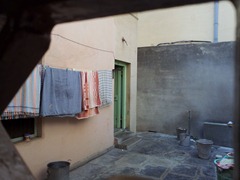 So by the time I'm awake, the field is usually down to my sixteen year old cousin, my uncle, my grandfather and me. Now there are two bathrooms in the ground floor and only one aging water heater between them, which normally takes up to half an hour to heat enough water for 2 people. By the time 8:30 rolls around, the water is just about done.

As if on cue, my grandmother yells out, at no one and everyone, "Go take a bath, breakfast in 30 minutes!" Just because she says so doesn't necessarily imply that she means it. What she's really saying is that whoever wants to take a shower next, better make sure that grandfather is not in line. If he is, then you wait. I scan the field and spy my grandfather shaving. That usually meant there's a clear 30 minutes before he heads inside.
I ask my mother,"Should I try for my morning walk or do I take my shower?" 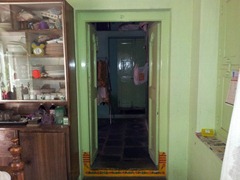 She said hop to it. So I hopped to it. After I went inside I realized my fatal error. I had started the game without checking the positions of the opponents. Of my cousin or her dad I hadn't heard a peep. Until I did. There I was, peacefully taking bath, when I heard the tap being opened on the other side (the bathrooms are built back to back in this house). To my horror even as I watched, the hot water slowed to a trickle.

Through the wall, my cousin yells "Are you done yet?"
Thinking dark thoughts, of my mother and her family, I yell back "Almost." What else could I do?
Finishing up with cold water, I was in a black mood against Fate. Fate does not play the game. What I dislike most, next to waking up and singing with birds, is taking bath in cold water. The least it could do was let me have the hot water, but no! Fate being what it is, must have it's fun. Getting back at me seems to be it's chief form of amusement and when I'm in my better moods, I don't object much.

Then comes the Russian Roulette that is breakfast in this place. Ten minute after my grandmother has yelled for us to come down to breakfast, my cousin and I scramble to the table expecting to see a half dozen dosas in various stages of cooling. I expect in vain. We instead sit down to empty plates and wait our turn. After exactly 2 dosas, taken by my mom and my cousin respectively, my grandfather breezes in and I go farther down the line. Still it was pretty good dosa, even after all the waiting and scrambling. Quite some time later, I stagger out, victorious at last!