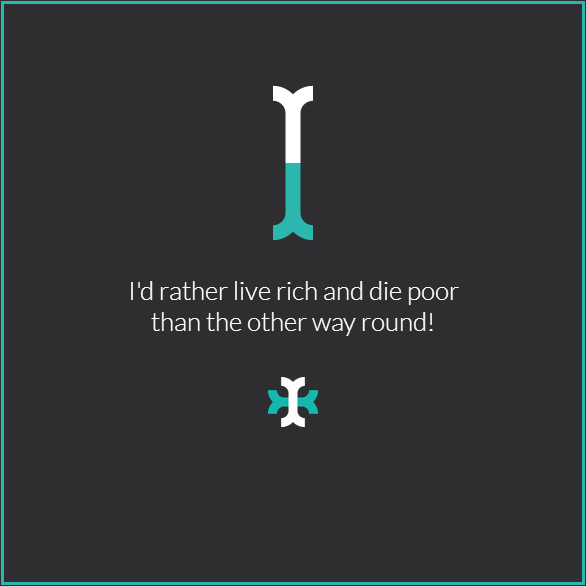 Money can't buy happiness. If I had a penny for every time I heard that old chestnut, I'd be a millionaire by now. Funny part is that it's usually spouted by people who don't have any. Talk about rationalizing! I guess they need to feel that rich people  have to have some handicap in exchange for all the money they have. All I say is  - it's way more comfortable to cry in a Mercedes than on a bicycle.

But lately I've found that it is a truism, albeit in a way I never thought of. Money can buy happiness, but only if you're willing to actually spend it. There isn't a store in this world where you can walk up to the counter to buy joy. But, if at this moment, a particular video game is the key to my happiness, then money can certainly buy that. The only thing to keep in mind is that you have to hand over the moolah to buy it. Once that game/food/whatever is paid for, your stock of money - the key to your future happiness - is reduced by that amount. Which is probably why we all work for a living.

It is here that most people seem to falter. I've seen so many people hoard money as if the little bits of paper actually make them happy. In the words of Douglas Adams 'This planet has - or rather had - a problem, which was this: most of the people on it were unhappy for pretty much of the time. Many solutions were suggested for this problem, but most of these were largely concerned with the movements of small green pieces of paper, which is odd because on the whole it wasn’t the small green pieces of paper that were unhappy.' Nicely put.

Case in point - my grandfather's house where I've been living since the dawn of 2012. Not having spent more than a couple of days here at anytime in the last 10 years, this visit has been an eye opener of sorts. If you want to know how a millionaire lives, read on. Here, they stick to their money like uncle scrooge to his doubloons.

My home in Delhi may be small, it's just a 4 bedroom flat, compared to the 6 bedroom, 2 storey mansion that is my grandfather's home. But it's damn comfortable which is more than I can say for this white elephant. In the blazing Delhi summers, usually at least 2 of the 4 air conditioners are running at full blast. In Guntur, only one of the ACs would be on, with the entire family stuffed into that one room like sardines in a can. A factory worker would not have watched his clock as intently as it is monitored here, simply to put a cap on the electricity bill of that one AC. My sister staying in the nearby hostel, comes home to run the washing machine through a cycle. On the other hand, I've seen my 70 year old grandmother wash her own clothes the day the maid decides its her day off! Two weeks into my stay here, I was questioned by my grandmother as to why I had to wash my hair twice a week & why I had to use the treadmill in the morning. Presumably coz she felt I was wasting shampoo and electricity!

To be fair, it is less for herself and more for her precious grandson that she doesn't want to waste a single penny of the millions she has. Whatever be the reason, life in Guntur is turning out to be more of a pain than I expected. All I can say is just as eating a cake is way more fun than having it, spending money makes me more happy than keeping it. The only money I intend to keep is so I can spend it in the future.

Moral of the above story - I'd rather live rich and die poor than the other way round!