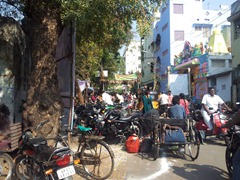 For all the intelligent and ignorant people out there, today is Mahasivarathri. To sensible people like you and me it means nothing more than yet another festival for which we get a much needed holiday from the drudgery of work. And seeing as how this made it just in time to make it a glorious weekend, maybe even take a little trip someplace.

But to the thousands of religious people in this sleepy little town of Guntur it is apparently a time to crowd into what seems to be the only Siva temple for miles. Mom having persuaded me to come by means of promising to 'make it quick' I followed in the car. The fact that my mom made that promise should have itself made me suspicious. As for trusting a woman to know the meaning of quick, only goes to show what an incurable optimist I am. Or an ass. One of the two.

We reached the temple and what a scene! The first day first show of a Rajnikanth release in the nineties could not have been more spectacular. There must have been a line at least a mile long, winding it's way through the temple precincts. It was so densely packed that there was barely enough space to complete the pradakshina. It amazed me, coz apart from the fact that there was an actual queue (a concept Indians can't really wrap their heads around), it was an extremely orderly one. No one was pushing and shoving, no yelling and bickering; just a bunch of people waiting to see God and passing the time by talking to each other. Almost like a doctor's waiting room.

There is a universal law, probably one of Murphy's, that where there is a queue there shall be a queue jumper, especially in India. Today, we were it. You see, my grandmother took one look at the crowd and decided no way in hell was she going to stick around for an hour to see God. I can understand, as my reaction was exactly the same. But where as my solution was to say hi to God and go straight back home, my grandmother’s was to do some heavy duty name dropping. The idea being to shortcut the queue & drop in on God without all the inconvenience!

Quite apart from the spiritual & philosophical objections, being pushed into the inner sanctum before the hundreds of people who had been standing for well over an hour, was not a pleasant experience by any stretch of the imagination. By the laws of physics and common sense, two bodies cannot occupy the same space at the same time. If we try to, which being Indians we will, it won't be pretty. And inside that temple, it wasn't. I took one look at that mob and just upped and left.

Imagine if you will, a small airless, poorly lit room built to house one idol and two priests filled to the brim with shoving, yelling and sweating people. Connaught Place metro station at 10 A.M or an India-Pakistan match could not have been more crowded. I'm supposed to find inner peace and commune with God here?! I have a much better chance of attaining Nirvana at Rio during the Carnival (tongue firmly in cheek).
In the immortal words of someone whose name I can't recollect at a place which I've now forgotten,

'God save the saviors!'