July 24, 2013
She woke up with a start. She was late, again. But what did it matter if she was late anyway? She quickly showered and stood in line to receive breakfast. Some girls smiled and talked but others, new to this place like her, stayed silent. After breakfast, she went to the next building and sat down with many others like her in a small room. Girls on one side and boys on the other. She dared not lift up her head to look at them, in case somebody saw it and reported her.

Sometimes she would sneak a peek at the boys and wonder about them. Were they unhappy too? Did some of them dream of escape? Maybe a few of them had a sense of humor, she liked to think so. She made up stories about them in her head, pretending to talk to one or the other. What would it be like to talk to them? They were humans after all, just like her. But it was strictly against the rules. Any girl caught talking to a guy was in for some pretty awful punishment. Or a boy talking to a girl. It was all the same. She didn't like to think about it too much. 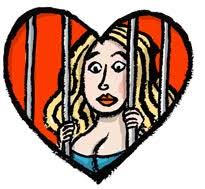 While she doodled a caricature of the speaker on paper, her mind wandered. It happened often now, maybe it was trying to do what she could never achieve - escape. She was jerked back to reality by the sound of the bell for lunch. After managing to eat something of what passed for food here, she went back to the building for more pretending to listen.

She had to be careful about where she went and when to get there. Everything was regulated according to schedule and visitors were rarely, if ever, allowed. She had no link to the outside world. Her mobile phone and laptop were taken away when she first came here. It was not allowed they said. She hated that word now. She had to think of it every single time she wanted to do or say anything. Was it allowed? Or was it not?

It was hard for her to remember that it had only been a month since she was left here by her parents. She was already beginning to think of the past as if it were a dream. As if it had happened to someone else. She couldn't bring herself to believe that she had once been so happy. It had to be an illusion, probably nostalgia. Already it was time for bed. The warden made the rounds, making sure everyone was inside their rooms. All this was for her own good, they said. It would prepare her for the real world, they said. She fell into a troubled sleep, thinking if this was the real world, she didn't want any part of it.

She woke up with a start. It would be the same, every day, for four long years. The outside world called it 'college'. She knew it only as 'prison'.