Laziness Is A State Of Mind!

July 26, 2013
I'm a lazy person. Note the lack of surprised faces. Practically everyone knows that about me. When I say I'm lazy I naturally refer to physical exercise. Any sort of mental activity I relish. Reading, debating, writing etc I get right down to it (unless I procrastinate, but that is for a whole other set of reasons!). It is only when I have to actually move my limbs that I start to resist.

In this, like in many other aspects, I take after my father. My mom is one of those people who irons and lays out the clothes to be worn the previous night. My dad is one of those people who wears whatever is next in line in the closet. I pick whatever is next in line, except if they don't look good together. I do make exceptions when it comes to doing something I like, but that doesn't happen often. I had a good, if somewhat lazy, life going.

And then I met the man who would become my husband. He calls himself lazy but this is a guy who used to hit the gym after work. Who used to bike 40 minutes to work from his house instead of driving, weather permitting. Who runs for miles. Who does push-ups after his shower. Who walked for 15 miles as a birthday 'treat'. Call that lazy?! He probably uses a different dictionary than I do. 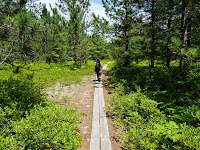 So how does a lazy person live with a gym rat? She brings him down to her level, of course! Just kidding. As with everything else in a relationship, there is give and take. I was adamant about not going to the gym, so instead we bought a bike for me so now we go for long bike rides together. I am not fond of doing exercises so now we look for excuses to walk/bike to places. Fortunately there are a lot of places within biking distance where we live including theaters and restaurants.

He's become a bit lazier and I've become a bit more active. Which is why he no longer goes to the gym and I walked 10 miles on our last vacation!