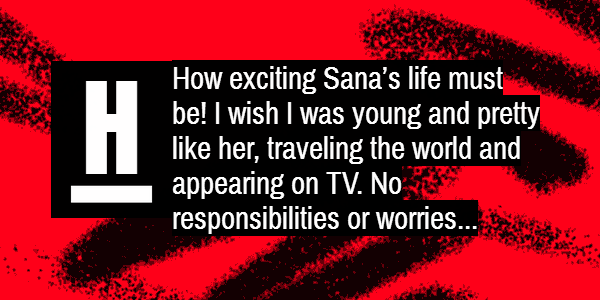 Nihar came home from the spa to find her son Abhay closeted with his grandmother, doing his homework. She sank into a chair and silently thanked her MIL for being at home to keep him occupied until Nihar came home from work everyday. Her husband Sudhir had suggested that his mother should move in when Nihar was pregnant, since her own mother had died more than a decade ago. At first she had been apprehensive - even though they got along with each other - that living together might be a problem but everything had worked out rather well.

Still, she had a nagging feeling that Abhay was more attached to her than Nihar or his father. Sometimes she felt that Abhay treated his parents as nothing more than a way to get nice toys and ice cream. They tried to spend as much time as possible with him in the evenings but there weren't enough hours in the day. By the time she came back home, she and Sudhir were both exhausted.

It wasn't just family time either. She honestly couldn't remember the last time they had a conversation  that was not about money or Abhay. They hadn’t gone out to dinner alone for weeks and hadn't had sex in months. Recently her MIL had started to hint about a second grandchild. At this rate, it would have to a virgin birth if MIL was to have her wish! Sudhir had suggested a family vacation might bring them closer together but there was no way she'd get time off from work now.

The thought of work made her cringe. Just last week, the group manager had announced an internal fraud investigation in her department. She'd feigned surprise along with everyone else but had been scared stiff since then. She never should have taken the money but Abhay’s school had insisted on a donation before admission. Confident that the sale on her mother’s property would go through in a few days, she had changed a few entries in the accounts for the amount.

She reflected bitterly, Why did the buyer have to back out at the last moment? How am I going to replace that much money? And even if I did, the audit team is not going to believe that it had been a computer error, not after this much time! I'm surely going to lose my job for this and who will employ an accountant who had been fired for fraud?

The sound of the telephone ringing brought her out of her reverie. It was her younger sister Sana who was due to visit them next week.
“Are you at a party?” she asked, aware of the noise in the background.

“No! It’s just an ad shoot, something went wrong with the scene and the director is angry. Gave me some time to call you.” Sana paused while Nihar waited expectantly. The next few sentences came out in a rush.

“I'm so sorry Didi. But I cannot come to visit next week. My manager just booked a shoot in Norway without asking me! The thing is I cannot cancel it without damaging my image, so I have to go. I’m very sorry, I was really looking forward to seeing everyone. Can you forgive me?”

“Of course, silly girl. Your work is important, I know. Besides next time around, you have to stay for 2 weeks!” Sana hung up in a few minutes leaving Nihar alone with her thoughts.

She loved her sister and they had always been close even though there was a 7 year gap between them. Their mother had died when Sana was just 16. She'd practically raised her sister from that point onwards since their dad hadn't known what to do with a sulky teenager on his hands. Nihar had been the one to encourage her modeling career. Her rise to the top had been rapid.

She had never grudged her sister's happiness but right now she was more than a little envious of her. How exciting Sana’s life must be! I wish I was young and pretty like her, traveling the world and appearing on TV. No responsibilities or worries...