Radha knew that Lakshmi was eyeing her sari, though no expression showed on her face. All the maids thought she was arrogant for not talking to them but Radha had never been one of those people who thought her caste made her a better person. It had just been easier not to talk to anyone when she had first come to the city. Besides, these maids never had anything much to talk about except gossip and no one knew better than her how much damage could be caused when women gossiped!

It was gossip that made her believe in Chandrasekhar. That he was a famous author, pretending to be a wastrel and swindler for his latest novel. He had been so charming, she had fallen for him completely. Her parents had died when she was 13 and she had always wanted someone to take care of her. She had been so happy. Until the day she woke up to find that he had disappeared and her house sold without her knowledge. He had turned out to be a swindler, pretending to be a famous author. She had been left with nothing, forced to move to the city and cook for a living. 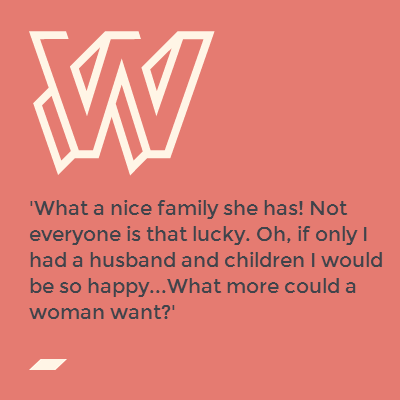 The sound of the lift doors opening brought her back to reality with a jolt and she quickly came out of her reverie. Mrs. Rao in flat 612 had asked her to come early because she and her husband were going to visit their daughter in London. She liked the elderly couple, more so because they were both retired college professors. She had never set foot in a college campus and admired anyone who had.

“All ready for the trip Miss?” asked Radha, for the living room was filled with the remnants of a week of hectic packing. She always called her Miss, even though Jyothi had asked her to call her Mrs. Rao - like her students used to do - or even Aunty. But in the small town where Radha grew up, all teachers were Miss and she couldn't bring herself to say otherwise.

Jyothi laughed and replied, “I had better be, since we cannot come back all the way from London if I miss something! Oh and before I forget, here is your payment for last month and the festival bonus.”

“Yes Miss and thank you!” replied Radha happily. She reflected for a moment on how different city people were from townsfolk. Here no one cared who she was or where she came from, all they wanted was someone who could cook. She did her job and she got paid, that was all that mattered. Not like the prying busybodies back home who had to know everything about everyone. If they didn't, well something could always be made up…

She went into the kitchen and started making lunch. She had just about finished when the doorbell rang. She heard the muffled voice of Diya, the Raos’ next door neighbour and a moment later both ladies were in the kitchen.

“Radha, Diya wants some of the masala powder you made last week. I promised her I would let her have it before I left.”

Radha turned to the rack where she kept the spices and filled the little bowl with her special masala powder. She had always envied Diya. College educated Diya with her happy husband and adorable girls. She was an excellent cook and kept a beautiful house. ‘What a nice family she has! Not everyone is that lucky. Oh, if only I had a husband and children I would be so happy...What more could a woman want?'