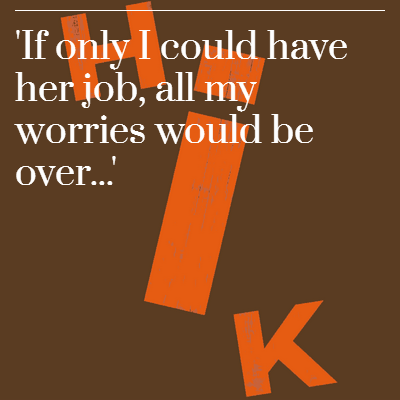 Like every other day, Lakshmi woke at 5 am in the morning. As a domestic worker in a sprawling metropolis, she had her share of worries. But today a new trouble stood out from the general sense of anxiety that usually ran in the background: the problem of rent. Lakshmi and her family of 5 - her husband Kumar and the 3 kids - shared rooms with another family in the run down building. They were lucky not to be living in the slums like some of the other maids but with the landlord raising the rent yet again, she wasn't sure how much longer they could live there.

She went about her daily chores mechanically, all the while puzzling over how to raise the extra money. Maybe she could ask a raise from one of the women she cleaned for. She had worked in some houses for more than 3 years and everyone agreed that she was fast and quiet, not like some of the others. She remembered that Mrs. Patel had wanted her for some extra hours on the festival weekend, that little bit would come in handy too.

She packed 3 lunches - for the 2 boys and her husband - and sent the girl off to school. Thank goodness the school gave lunch every day, that meant one less mouth to feed for one meal a day. She would have much preferred one of the boys to go to school but there had been none in the village back home. When they finally came to the city because her husband got a construction job, it was too late for them. Both the boys had hated school and refused to go but Neha seemed to like it. Maybe she would escape poverty someday. But that would not help them with the rent now...

She walked up to the apartment complex where she worked and signed in at the gate. Just as the lift doors were about to close someone called and she pressed the button for the doors to stay open. She was surprised to see it was Radha, the cook. She usually came in the afternoons but someone must have asked her to come early today. Radha was an educated (XII pass!) upper caste woman and made sure everyone knew it. Maids were beneath her and she never talked to any of them.

Lakshmi glanced at the nice sari that the other woman wore but then she didn’t have any husband or children to take care of. She wished she could also cook instead of scrubbing the floors but most of the families here wouldn’t allow a low caste female to touch their food. Lakshmi thought, 'How nice it must be to just work for an hour or two and make Rs 2000 a month! She doesn't have to get on her hands and knees everyday or wash dishes in the cold winter mornings, all for just Rs 700-800. If only I could have her job, all my worries would be over...'