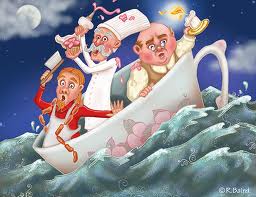 A rather unusual incident this weekend reminded me of the classic nursery rhyme. Ok, so it was four grown men instead of three and they were sitting in an inflatable raft instead of a tub and no one was a butcher, a baker or a candlestick maker but hey if you want to nitpick.. /*grumbles*/

Anyway it all started a week ago in East Lansing, when we were trying to find something to do in the sleepiest city I've ever visited so far. One of our friends, +Chandrasekharan Jayakumar, who had so nicely accompanied us to help while away time while the BRZ was getting detailed, asked if we wanted to go camping up to Lake Higgins for 2 days. Of course +Abhilash Bingi & I said yes, given that the sun might go into hiding any day now, taking summer with it.

And thus began a series of blunders leading right up to the night we set up camp. The last time we went camping (my first time) everything was planned meticulously, right down to the spoon and knife. This time? Not so much. Here's the laundry list of things we forgot: sleeping bags (duh! right?), bug spray (which we'd bought just the previous night), toothbrushes & paste (but I didn't forget my chapstick though, talk about priorities!), jackets (not intense cold but still we could have used them) and umm probably some more things that I can't remember right now. /*sheepish grin*/

After shopping for the requisite necessities, we finally set off for the lake the next day. We inflated the raft and dragged it into the water, taking turns in it. Every single one of us tried our hand at rowing, with predictable results. After a number of dizzying circles, Abhi & I got out of the water since I was starting to catch a cold. What can I say? I get a cold from taking a shower sometimes!

A couple of hours and a whole lot of delicious lunch food later (courtesy +Chandrasekharan Jayakumar and +Sukanya Pranathiageswaran), we went back to the lake for some more water fun. That's when it happened. I was napping in a beach chair, when all four guys - R, C, M & S - decide to try out a physics experiment in buoyancy. Which brings us back to the reason for this blog post.

Four men in a tub,

And who do you think they were?

Engineers, every last one of them,

They all sailed out to sea,

And run the hell away from them! Yup, that actually happened. Sorry you had to see that, little girl on the lake. Thus concludes my very own rendition of a hilarious recreation of a classic nursery rhyme.

P.S: I'm sure there's plenty of wrong with that sentence, but what the hell..it is MY blog after all!

P.P.S: Anyone else notice that all the paragraphs begin with an 'A'?