July 24, 2011
Now that the puducherry fellow turned out to be a bust too, my grandfather has started championing his Salem guy again! He calls my mom, then my dad and now finally its my turn to talk to him about why I do not want to see a guy who is short, old and lives in Salem for god’s sake! According to him, I have no real reason to say no. I mean if that’s no reason, I don't know what is…I heard him tell my dad that we know the family and such (we’re actually related; but quite far off thankfully). And I'm like so what? Am I marrying the entire freaking family??!!

Of course this eventuality is covered by one of the laws of getting married.In that the only reasons I can have to say no to a guy (provided he’s rich) is if he’s a chain smoker/alcoholic/womanizer! And how would I know if he is? All the guys my parents have sifted through so far have squeaky clean profiles. Everybody is a goddam vegetarian, never smoked or tied one on and of course never even looked at a girl in college. What are these guys? Aliens from another galaxy? That’s the only polite explanation I can think of.


On a side note, every some guy doesn’t make the cut due to what ever xyz reason, the official version given out is that my parents didn’t like his profile. Never can it be said that I said no; what so ever maybe the reason. I mean to say it cannot be said that I rejected a guy coz he’s like 32 to my 26, otherwise people might think I’m arrogant!!!

Whereas the guy can reject me for my taste in jewellery, my politeness in talking English, for me working and hell, even for me living in Delhi. Yes my mom actually told me that was the kind of talk she got from some relatives. That many people do not want me coz I'm living in Delhi. Talk about provincial. I honestly don’t know whether to laugh or cry!

A guy can be living outside the country for years while studying and working and I'm expected to believe he’s RAM incarnate BUT he can express doubts as to my ‘culture’ or lack thereof just coz I'm living in Delhi. Sometimes I think I should just send a link to my blog to every prospective groom out there, let them read all this. Then if you still want to talk, we'll have a go. At least I would be spared the ignominy of meeting people dressed like something from the 60s.

So here’s me guys: 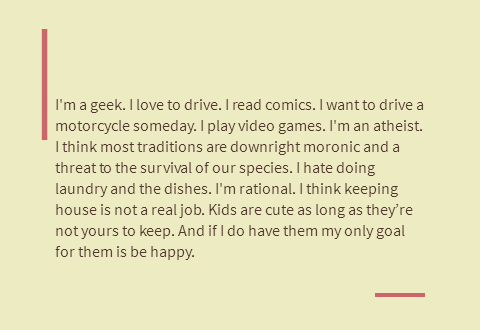 If you want a real person, let’s talk. If you’re just looking for a 2D ‘normal and nice’ girl, keep moving!