A God for everything

The only thing I was fit for was to be a writer, and this notion rested solely on my suspicion that I would never be fit for real work, and that writing didn’t require any. – Russell Baker

Written with me in mind? So often I’m left wondering just what am I doing here? Trying to write a blog about, well, everything. Quite ambitious and probably just a tad too impossible. So far I’ve written about software that I use, the things I’ve done, opinions, rants…everything and the kitchen sink. Not only does it feel very confused and mangled, I have a feeling I’ll be doing this for a long time to come, like now for instance.

Is it true that the more you want something to happen, the lesser the probability of it actually happening? I mean like are we subconsciously jinxing it or something? Where ever you may be from, if you are an Indian this has probably happened to you. You’re reading or watching a movie and you start thinking and you wonder what if that (insert appropriate catastrophe/accident here) happened to me? Just normal run of the mill wondering. But woe betide you if someone overheard, especially if that someone happens to be your mother. He/she will immediately say don’t say stuff like that, it might just happen.

This has happened to me at least a dozen times, all within earshot of my mom. Co-incidence? Maybe. Anyway it made me curious enough to ask her another one of my why questions that she despises. And what I found from her was nothing short of hysterical and it also answered another of my questions that has always bothered me. Apparently there are a few gods out of the whole pantheon, whose sole job is to eavesdrop on unsuspecting humans and just as we say something to make it come true. Aha! you think, so that’s the secret, the Indian version of rub the lamp and genie appears. Not so fast.

These gods also have a few caveats.

For one, they never grant you something that you actually want like an Xbox or or a Kindle. They just go after the bad stuff like what if I had an accident or what if I died tomorrow. And even the bad stuff is no sure thing. They’re capricious these gods of ours, Zeus and his gang don’t even come close! Finally, a couple of more gods I’ve got job descriptions for.

What other gods do we got? Well there is this 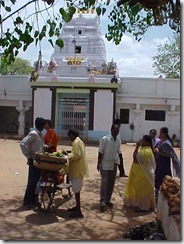 Visa God in Hyderabad that specializes in getting H1-B visas should you so want. Now I’ve heard everything! A god for visas? You bet. Our gods already do the weirdest of things like inspect our cars and bikes before we ride them, help us pass exams (a little bribe wouldn’t hurt either, say a special pooja or 101 coconuts?) et al. Why, did you think they won’t be as up to date as us humans? I’ll say this much for our gods. They change according to the times, even if their devotees do not!