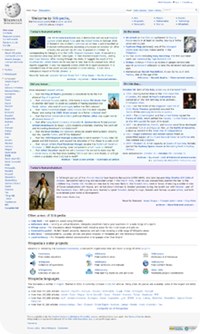 I was getting ready to go to the office today when I saw an article on Wikipedia in the paper. Not the latest news or anything considering it wasn’t even today’s paper but it caught my eye. I tend to notice tech related articles in our papers, since they’re usually hilarious. Not in a ha ha funny sorta way but more along the lines of ‘OMG! are we still in the 20th century?’

In fact this particular article was so poorly written and obviously a fluff piece, but I’d have thought even those have some standards. Apparently not.

The article was titled ‘The Downside of Wikipedia’; fair enough, every website out there has one – at least. But the first sentence was enough to give me an idea of what followed. The writer said users frequently complain of errors and/or incomplete information.

And who else but Raveena Tandon would qualify as a typical user of the site? She complains about some films said to be on her currently working list, which were in fact her husbands’. Next up, a student complains that her teachers didn’t allow students to list Wikipedia as a reference source. Another one says she couldn’t find all the information about her textiles project there.

I honestly didn’t know to laugh or weep. I mean what do these people think Wikipedia is? As far as I know (& I quote this from Wikipedia itself) –

Wikipedia is a free, web-based, collaborative, multilingual encyclopaedia project supported by the non-profit Wikimedia Foundation. Its 18 million articles (over 3.5 million in English) have been written collaboratively by volunteers around the world, and almost all of its articles can be edited by anyone with access to the site.

The whole point of Wikipedia was to collect as much information on as many topics as possible, all of which can be accessed by anybody, unlike the offline versions. It replaced the expert driven intricate process with user edited content, free for all. Wikipedia is supposed to help  me with casual knowledge, say I want to read about philosophy, I just hit the link & off I go into the unknown. It was definitely not meant for the student of philosophy to base his/her thesis paper on!

Who knew? If this is quality journalism, I think I’ll stick to my blogs.