February 20, 2011
Once upon a time, a tourist was wandering around a temple and came across an elephant. It was a huge beast, munching on his food, flapping his ears and generally being an elephant. Then the tourist noticed that he was tied to a post with a rather flimsy metal chain. He was aghast and asked the mahout if it was safe. The mahout said it was perfectly safe & that he would not try to break free. The tourist was surprised & asked why not. This is the reply he got: “When this elephant was a baby, this chain was strong enough to stop him. However hard he tried, he couldn’t break free. So after some time he stopped trying. With time, he grew stronger than the chain but he will never try to break free cuz he’s used to it!” 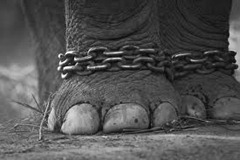 Thousands of years ago, while men hunted & gathered, women protected & raised the young. Naturally the former was far more exciting than the latter. In order to give their women something to do (& probably to transfer their fears/headaches to someone else), they invented the Holy Trinity – Religion, Tradition & Custom. Granted, they might have even served some sort of purpose when they were established (hey, it’s just a theory), but as the centuries passed, it became apparent that they were nothing more than chains. But like the elephants, women have become used to it!

Why do I say this? Quite simply its what I observed in the women around me. Granted it is not a scientific study nevertheless, bear with me. Whenever I ask someone why a certain thing is done, especially why there are so many things for women to do but never anything for the men, stock reply is that we have to (as if that’s any reason). Of course this whole charade is enforced by means of the so called elders of the family. So far so good. But how can I explain why these women continue to do the same things even when their men are not around? Its not because they sincerely believe in them as they don’t even know what the customs mean or accomplish anymore, if ever they did. Then why?

Because they are used to it! To borrow a phrase of Rousseau -

Woman was not born free, and she is everywhere in chains. No woman thinks herself the master of others, and so remains more of a slave than ever.