January 30, 2011
The Life Insurance Corporation of India has been around since the dawn of time, well not exactly but to someone like me born in 1986, 1956 is the dawn of time! And its ads have always seemed to reflect it. Of course, considering it was the undisputed king of the hill – much like Microsoft once was – it didn’t need the ‘fancy new ads’ used by others. All that changed with the entry of private players. Not that they were any better than the state insurer, but their ads sure were. For the first time people started to notice insurance advertising.

Gone were the days of staid, stale run of the mill ‘We take care of widows’ spiel (not all employees got that memo though!). Yet, while competitors ran ads emphasizing financial security & independence, disaster planning and being prepared, what was LIC doing? It was running ads which looked like they were made for and by 50-55 year olds. Like someone in my training batch said “LIC ads are like art movies while the rest are like commercial cinema.”

Remember the ad showing a widow explaining how ‘Sharmaji’ made sure his daughter got married and son got an education? Coz of course a daughter doesn’t need an expensive education & a son’s wedding doesn’t involve any expense for him! An ad which was called out by the AIDWA for blatant discrimination and furthering the assumption of dowry.

What never fails to amaze me to this day is how no one at the company saw it. Surely at least one person might have seen the ad and thought “Wait…What??!! But apparently no one did, the ad was run and history made…sort of. I’ve lost track of the number of people who have told me it sucked. It definitely did not help the insurer’s image & even worse, it wasn’t even portraying any clear message, apart from the standard relief angle.

Fortunately though, LIC seems to have learnt from their mistakes, if their recent ads are any indication. The ad below for jeevan saral is nothing short of brilliant, coming as it is from LIC. It was simple, had a high ‘cuteness’ factor and after grabbing eyeballs conveyed the message. It also utilized children in quite a different manner than is usual in insurance ads. Children are usually shown as recipients of the returns from insurance (witness HDFC’s ad where the kid gets a bicycle from grandpa). Rarely as in this ad, are they used to make a point so effectively. In fact I’m hard pressed to see how any other demographic could’ve been used to showcase the simplicity of the product. 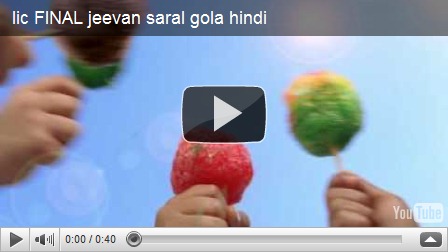 cute, direct and most important–effective.

Another example is the ad for jeevan tarang. The visual representation of getting more than you bargained for was superbly executed and could be understood by anybody. Plus it doesn’t hurt that the kid was extra cute! 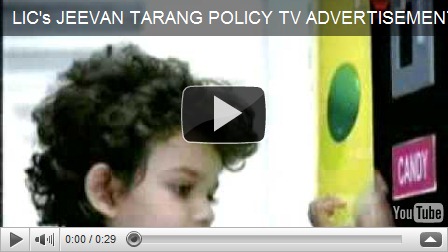 very evocative and gets the point across

So are we seeing the state insurer catching up to the big boys in terms of advertising? Sure seems like it, especially when I see such ads like Future Generali’s convoluted ‘ghost’ ad. Now there is an example of what not to do in an advert. In fact it took me a full 20 seconds to realize it was an insurance ad, which is the exact length of the LIC ad. Looks like someone could take a leaf out of LIC’s playbook (frankly that’s a sentence I never thought I would ever say).

Here’s hoping we finally see a real battle between LIC and the rest & not just in advertising. With the majority in the country yet to be insured, the Indian Consumer can definitely use it.