A Safari On Windows

September 26, 2010
I have a confession to make. I am a geek, or to be more accurate, I’m a female geek. And as you can see from some of my posts earlier, I tend to experiment a lot with software. Still, I do have my favourites that I absolutely have to have on my rig like Firefox, Find and Run Robot, Evernote etc. These are the applications that I practically have long term relationships with. I had tried out most if not all the alternatives available out there before settling down.

That however doesn’t mean developers stop making competitors in the hopes of enticing me to switch. Particularly in the case of browsers. Where once I had just 2 choices – IE or Firefox, now its a battle zone with new versions being released practically every month.

The list continues to grow with IE 9, Firefox 4, Google Chrome 6, Opera 10, Safari…Although I’ve had brief flirtations with all of them at some point or the other, I kept going back to Firefox.

A couple of days ago,RS suggested that I give Safari a try. Now I did take it for a ride when it was first released and frankly while it was good, it didn’t blow me away like Firefox/Chrome did. But his suggestion intrigued me. Had I missed something the last time around? Am I missing out on something good in the pursuit of my one true (browser) love? So I did what any sane person in a committed relationship would do, I took a peek.

I went shopping down to the Apple website and met with my first roadblock. Safari for Windows can only be installed with Quicktime, Bonjour and Apple Update. If there is one thing I despise, it’s software which piggy backs on others. Whoever told Apple that was a good idea needs to be sacked. Strike one. 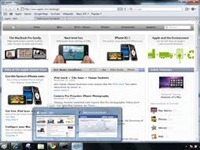 Still I persevered. I downloaded it, installed it and fired it up for a test drive. Then I uninstalled all the crap that decided to make itself home on my rig. No doubt Safari looks good, like all Apple products. But I have to say it looks very out of place in a Windows 7 world. And the girl part of me likes good looking. Strike two.

Safari boasts of over 200 innovative features packed into its latest release, 90% of which no one would notice or care about. There were 3 which had me curious to try. 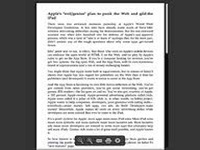 One was the Reader, clicking on which strips a webpage to its bare essentials to, yup you guessed it, focus on the words.

Although it was good, I already had this feature in Firefox for ages thanks to the Readability bookmarklet from which this was actually ‘inspired’ *cough* read copied from. As usual, where on Firefox I had the ability to customize how the words appeared on the page, Safari had a ‘take it or leave it’ attitude. 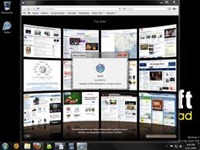 Second was the Top Sites feature. As you surf, Safari keeps track of the most visited websites and pins them on the home screen or loads it when you open a new tab. Again, this feature was first given to the world by Opera and in my opinion, implemented far more elegantly in Chrome and Firefox (with many add-ons). 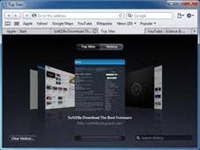 Third was browsing through your history/favourites CoverFlow style. I admit this one actually got to me, until that is, I actually tried to use it. I’m not a typical web surfer who goes to the same couple of websites everyday. For me to browse through every site visually takes up way too much time. I also realized I can’t remember the last time I actually went through my history trying to recall a particular page. I just Google it.

When it comes down to features Safari has all the standards in place. Minimal toolbar, great tab handling, excellent page rendering and it is fast. But (you knew there was a but, didn’t ya?) it has nothing to make it stand out from the crowd. Every browser has its ‘thing’ like Firefox’s customizability and extensibility or Chrome’s minimalism and speed. 30 minutes into using Safari and I was wondering “What’s your thing?”

Now that IE 9 actually looks promising, I’d say that the average user can just forget about switching. For power users or those concerned enough about security, there’s always Firefox/Chrome. As for Safari, Strike three. And you’re out.

To paraphrase Caesar - I came, I saw and I moved on!